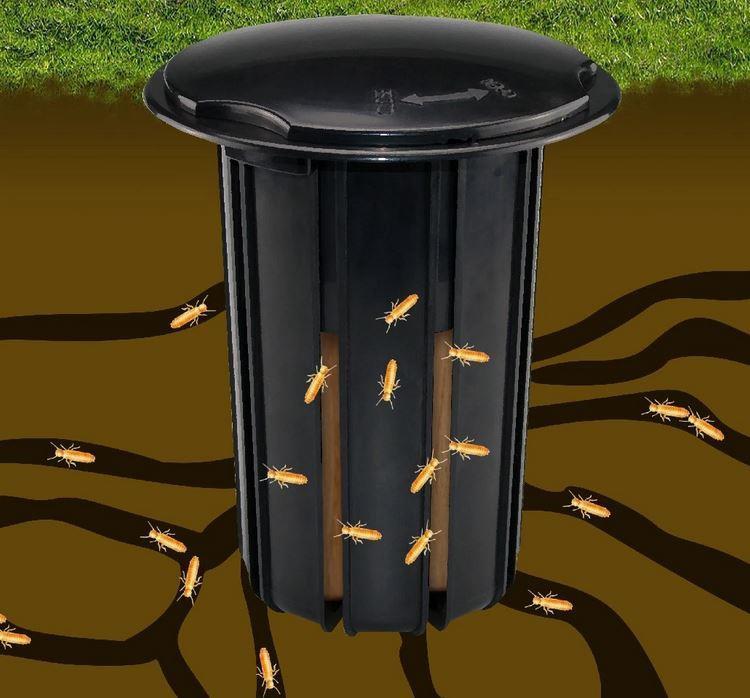 Termite baits, also known as bait stations, are capsules that contain paper, cardboard or other acceptable termite food laced with a slow-acting poison that is lethal to termites. Baits are sometimes called “termite traps,” although they do not actually trap termites.
Baiting is an alternative to older “barrier” treatments in which large amounts of pesticide are applied to the soil underneath and surrounding a building in order to block all potential routes of termite entry. Termite baits employ small amounts of slow-acting poison that is gradually spread among worker termites when they return to the nest to feed one another.
Some baits are installed below ground and others are positioned above ground in the vicinity of known termite mud tubes and feeding sites. Below-ground stations typically contain untreated wood (as the poison rapidly decomposes underground) until termite activity is detected inside the stations, at which time the exterminator will deploy poisoned material. Poisons are designed to eliminate the colony either through sterilization or by stunting their growth.

Baiting requires fewer disruptions to the building’s occupants than does conventional barrier treatment, which often requires rolling back carpets, noisy drilling, concrete dust, removal of furnishings, and other disturbances.
Baiting is environmentally friendly compared with soil treatment, which may require the use of hundreds of gallons of pesticide. Baiting will not endanger drinking water in houses that make use of wells and cisterns.
Positioning of baits is not complicated by inaccessible crawlspaces or other areas that are difficult to treat with liquid barrier methods.
Baiting can be used as a preventive measure in the early detection of termites, as the method requires extensive monitoring.
Underground bait stations are unreachable by children and animals.